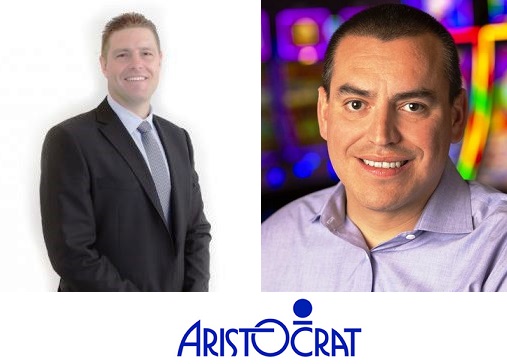 Mitchell Bowen and Hector Fernandez will drive growth at Aristocrat.

Aristocrat has announced that it is bringing together all operations under a Global CEO of land based in addition to new leadership in the Americas. Mitchell Bowen will be the new CEO Land Based, responsible for all of Aristocrat’s regulated gaming businesses worldwide, while Hector Fernandez (CFO, Americas) has been designated president of Aristocrat Americas. These appointments are effective immediately, subject to any necessary regulatory approvals. Fernandez has taken over from Matt Wilson, who has accepted a role outside Aristocrat and departed the company.

Aristocrat Group CEO and president, Trevor Croker, said: “I’m delighted to have the opportunity to elevate a leader of Hector’s caliber to lead our Americas land based business. Hector is a seasoned commercial executive with a track record of building high performing teams and delivering outstanding results. He has a deep understanding of Aristocrat’s Americas business, and has played an instrumental role in developing the region’s growth strategy, supporting its execution since joining the team last year.”

Commenting on his appointment, Fernandez expressed: “I’m honored and excited to take on the role of President, Americas, at Aristocrat. I look forward to working with all of my colleagues and our valued customers to extend our leadership position in this region by delivering more choice, performance, service and quality than ever before. I believe that Aristocrat has the very best game design and technical talent in the industry, with an outstanding team of passionate customer and commercial leaders. My focus will be on unlocking the full potential of our people, products and growing capabilities to ensure Aristocrat Americas can take the next step forward in its growth story.”

Regarding Bowen, Croker stated: “He is a first class and deeply respected global gaming leader. He has more than 15 years of experience across senior marketing product, commercial and transformation roles at Aristocrat in all major gaming regions. Mitchell spent several years in the Americas, leading Marketing and Product functions, and worked closely with me in leading in the turnaround of the Australia and New Zealand business. Mitch currently has commercial and operational accountability for Aristocrat’s land-based business across the balance of the globe. He also has deep and longstanding customer relationships and has played a core role in thought leadership and in execution of Aristocrat’s growth strategy over the past several years. I’m thrilled to elevate Mitchell to the role of CEO Land Based and look forward to his expanded contribution.”

Jabon (Analytics Intell): “Through the centralization of data and analytics, we offer solutions for increased productivity, efficiency and cost reduction”

Notley (Escapology): “Our service is a huge opportunity for any casino...