Developing countries: Gaming and entertainment to be impacted by Metaverse and VR technology

Excitement for the Metaverse and virtual/augmented reality (VR/AR) is much greater in developing countries than in high-income countries, according to a survey conducted for the World Economic Forum (WEF). Market research firm Ipsos released the results of the survey, showing the concept is now widely recognized: 52% of more than 21,000 adults surveyed across 29 countries are familiar with the Metaverse and 50% have positive feelings about engaging with it in daily life. 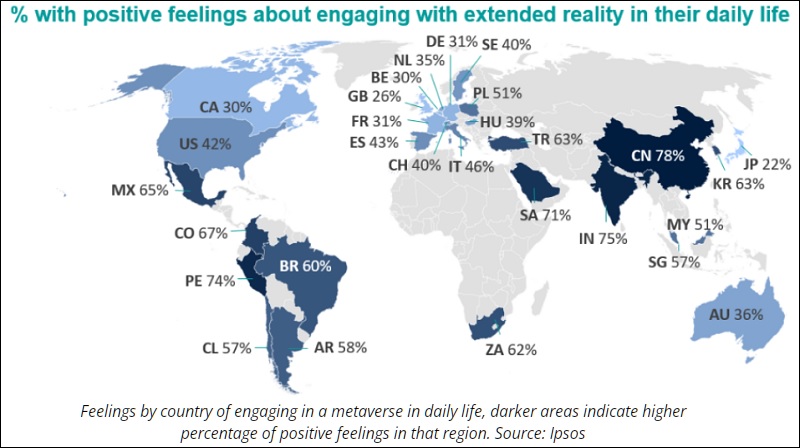 Interestingly, the concept was less familiar in those high-income countries, too, with fewer than 30% in France, Belgium and Germany. Turkey (86%) was most familiar with the Metaverse, followed by India (80%), China (73%) and the higher income country of South Korea (71%). Poland scored the lowest at 27%. 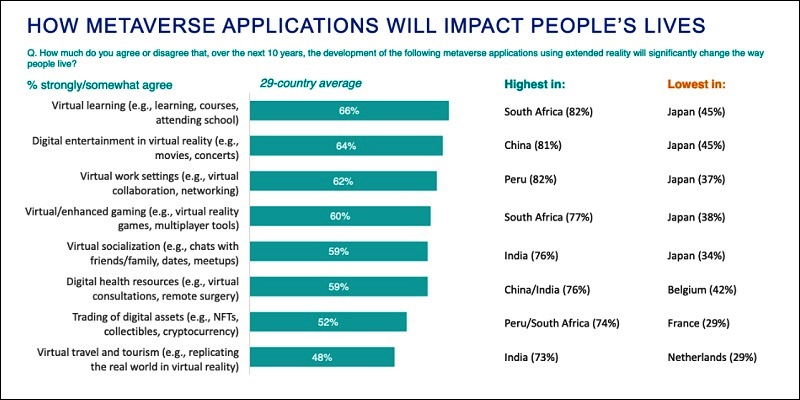 GAMING, CRYPTO AND THE METAVERSE

Respondents were also surveyed on the areas of life they agree the Metaverse will impact the most. Developing countries such as South Africa, China and India agreed areas like virtual learning, entertainment, work and gaming would make an impact on people’s lives. Again, respondents from high-income Japan, Belgium and France had the lowest percentages of those who agreed that Metaverse applications would significantly change people’s lives.

Developing countries seem to be more enthusiastic about crypto and blockchain across the board, according to an April report from cryptocurrency exchange Gemini, which pointed out that half of the respondents in India, Brazil and the Asian-Pacific region purchased their first cryptocurrency in 2021. The text made the case that inflation and currency devaluation are the drivers of crypto adoption in those regions, stating that residents of countries that experienced 50% or more currency devaluation were five times more likely to plan to purchase crypto than countries that have less inflation.

Gemini also found that countries like Indonesia and Brazil are leading the world in terms of the share of cryptocurrency investors among the general population. According to the study, 41% of respondents both in Brazil and Indonesia reported owning crypto, compared to just 20% in the United States, 18% in Australia and 17% in Europe.