By the end of last year, Western Europe was home to almost 209 million mobile gamers. Based on Global Games Market Report, by market research firm Newzoo, player growth in Western Europe is forecast to outstrip other mature mobile games markets.

In this sense, forecast suggests that, between 2019 and 2024, the number of mobile gamers in Western Europe will expand with a compound annual growth rate (CAGR) of +2.3% compared to +0.8% in North America and +2.2% in Eastern Asia. The global growth rate is higher (+4.4% 2019-2024 CAGR), thanks to high growth in emerging markets such as Southeast Asia, Latin America, India, and the Middle East & Africa. It’s important to note that Western Europe’s large number of (high) spenders means its revenues are more significant. 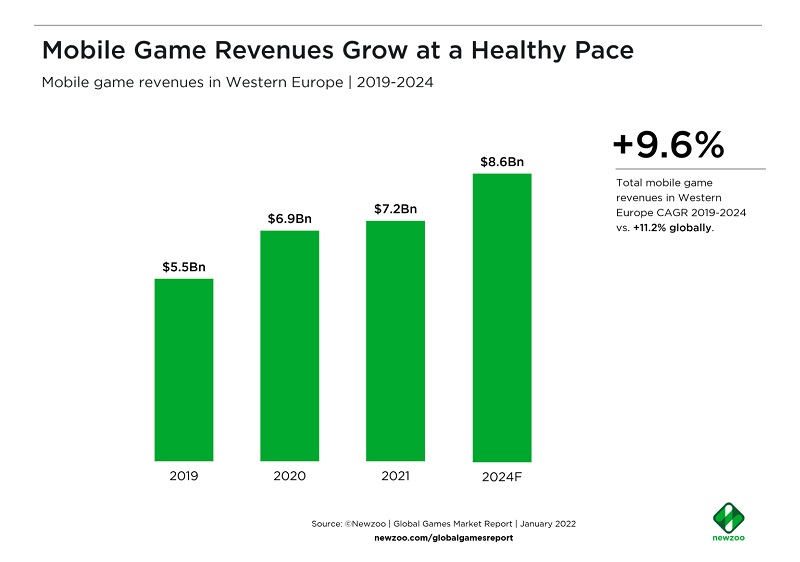 In Western Europe, mobile games generated USD 7.2 billion in revenue from consumer spending in 2021 (excluding ad revenues). While revenues still grew between 2020 and 2021, progress was slower than in the previous period. Mobile’s revenue slowdown from 2020 to 2021 was not unique to Western Europe. Across the board, 2020 was a monumental year for gaming, which attracted many new and returning players due to COVID-19 lockdowns. Western Europe’s mobile games market is healthy, as is illustrated by Western Europe’s continued growth in mobile revenue and player numbers across 2020 and 2021, despite the impact on user acquisition on iOS due to Apple’s removal of IDFA in Q2 2021 and COVID-related challenges. Android mobile gaming in Western Europe continued to see stable growth last year. In fact, 55% of Western Europe’s mobile gaming revenue came from Android v 35% in North America. 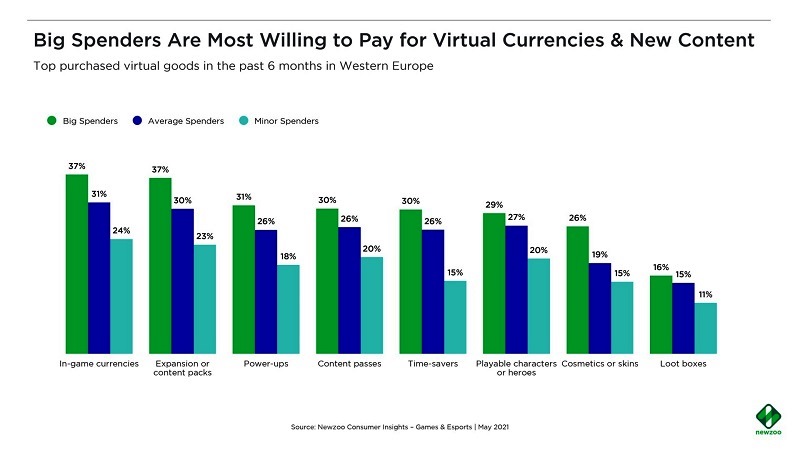 Western Europe’s mobile games market will develop even more in the long-term, hitting USD 8.6 billion in 2024. This growth will be driven by: a) Ongoing live services and hybrid monetization innovation (across core and casual genres); b) Console and PC-first companies bringing their franchises to mobile to bolster their growth and revenue streams; c) Mobile games getting increasingly complex and immersive, attracting core gamers to the platform and boosting revenues; d) Opportunities to boost average spend per mobile gamer, which is relatively low compared to console games in the region and mobile games in other mature markets, and e) A new generation of mobile-first gamers (for instance, ROBLOX reported 54% of its revenue coming from mobile in 2021).

The bigger the spending group, the more likely it is to be male-dominated. For instance, 62% of big spenders are male compared to 60% of average spenders, 58% of minor spenders, and 47% of non-spenders. Besides, the more players spend, the younger they are. Big and average spenders have an average age of 31.4 years old compared to 33.3 for minor spenders and 36.5 for non-spenders. Unsurprisingly, big spenders tend to be the players who engage most with the game (and therefore spend more time playing). Newzoo cross-analyzed their playing behavior with spending habits, and the results speak for themselves: a) Nearly 70% of big spenders play more than three days a week compared to less than 50% for the other groups; b) 53% of big spenders play longer than 6 hours a week on mobile, compared to only 20% for the others, and c) Naturally, some genres take up more of players’ time than others. 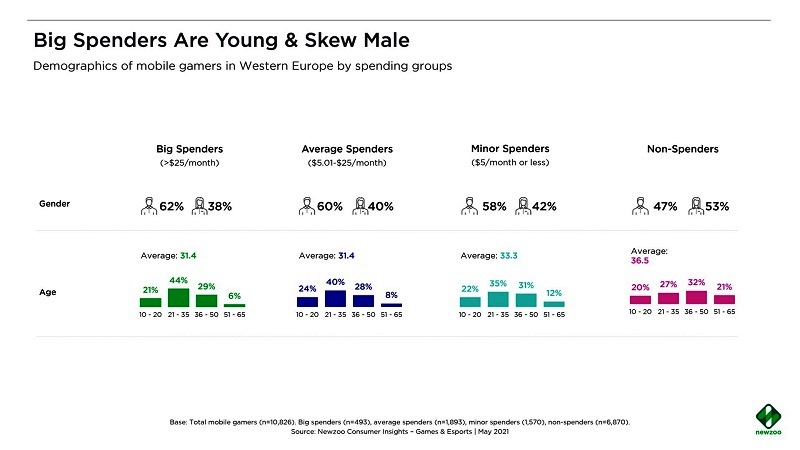 Mobile gamers in Western Europe were asked about which genres they played the most in the past six months. The biggest spenders tended to list more core and complex genres such as shooter, adventure, fighting, battle royale, and role-playing games. Casual genres, such as puzzle, are more prominent among the non-big spending groups, those who spend no more than USD 25 per month on mobile games.

Naturally, these genre preferences are visible in the types of content mobile gamers buy. Big spenders are more likely to spend on every category. Relative to other groups, spending on cosmetics and skins is more common among big spenders. This is, at least in part, because the casual genres enjoyed by average and minor spenders have fewer options to buy cosmetics and skins. Rather, in-game micro-transactions in casual games are mainly for extra lives, moves, and power-ups. 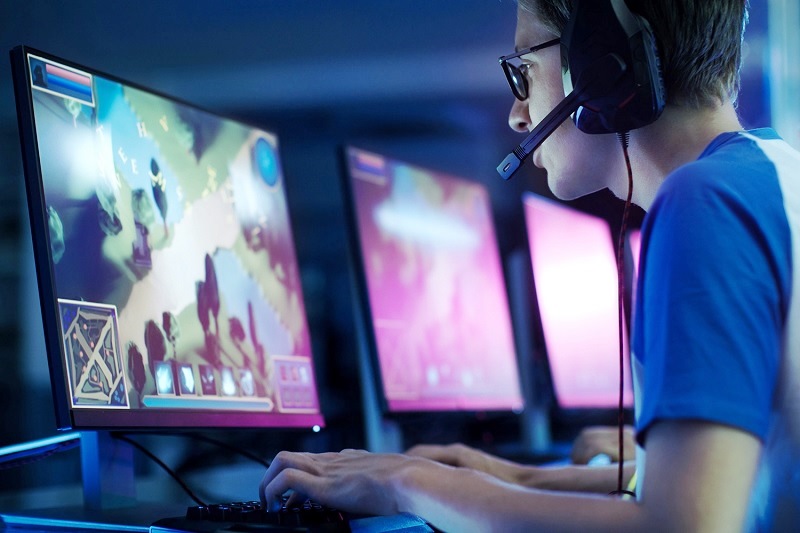 When diving into the Esports scene, data reveals Western Europe’s Esports generated USD 209.6 million in revenues in 2021, powered by an Esports audience of 47.0 million. The live-streaming audience (those who have watched live-streamed gaming content at least once in the last six months) reached 91.3 million in 2021.

YouTube is by far the most popular game streaming platform among mobile gamers in Western Europe. About those who watch game content, over 90% report that they watch more than once a week on YouTube. Meanwhile, rivals (including Twitch, Facebook, Twitter and TikTok) each get 50-60% of viewers watching more than once a week.