G&M News weekly analysis on the Uruguayan gaming market continues. Here is a precise outlook that reviews the past, describes the present and anticipates the future of the activity.

Gambling in Uruguay has more than 100 years of history. In 1819, the first lottery draw was held and in 1856, the current National Directorate of Lotteries and Pools (DNLQ) was created. The first legislation that regulated gambling is Law #1,595 of 1882. The industry evolved and, today, games of luck and chance in Uruguay make a solid and reliable structure. Government and organizations such as the General Directorate of Casinos (DGC) assure that both players and operators can enjoy a safe and transparent environment.

In the country, land-based gaming is divided between a majority of State rooms and a few private ones. With regard to online, Supermatch is the only operator authorized by the Ministry of Economy and Finance (MEF) through a license granted to La Banca in 2005 to provide remote sports betting.

INDICATORS OF STATE SUCCESS
When it comes to focusing on land-based state gambling, the DGC presented at the end of last year a report that highlighted that, between 2009 and 2018, the accumulated and transferred net profit in those 10 years was US$642 million, with an average profitability of 30% in that decade. The number of employees was also reduced: 1,129 in 2009 and 1,035 in 2019. In parallel, there was an increase in the number of establishments, expansion of premises and improvements in the services provided by the central office, with the development of the Center of the Commercial Area and the DGC Security Sector Operation and Monitoring Center. Those investments represented more than US$82 million. During that time, it was ensured that all gambling properties in the country were connected online in real time with the Directorate, both for the monitoring and control of commercial management and for the purposes of control and security, through closed circuit television with the latest technology. 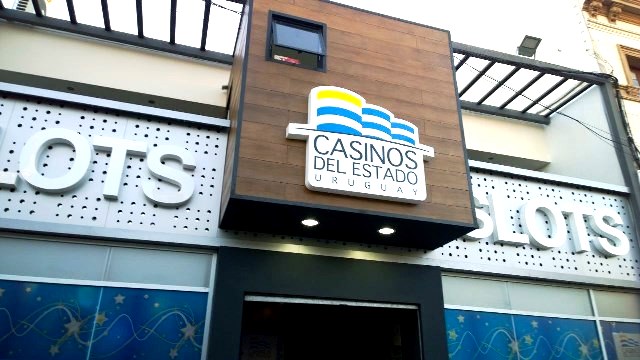 According to 2018 estimates, what was wagered in that year in Uruguay (through lotteries, casinos, sports betting and racetracks) represented 1.35% of GDP, reaching US$ 813 million and exceeding the US$809 million from 2017. Back then, the most popular games in the state were the Quiniela and 5 de Oro, but the growth of online gambling was notorious. Regarding income for state casinos managed by the DGC, it grew 3% in 2018 (year-on-year) to US$204.3 million. 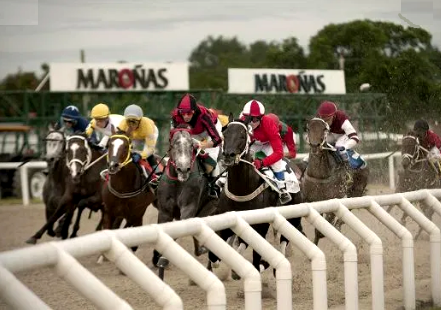 CONTRIBUTION OF THE PRIVATE SECTOR
In Uruguay, the multinational gambling company Codere began to concentrate its land-based operations in Montevideo and its periphery in 2002. First, it managed the Maroñas National Racetrack and the activities derived from it: horse betting system, six gambling rooms with 2,253 gaming terminals and 27 betting points. It is a comprehensive entertainment center. In 2012, Codere expanded its business with the Las Piedras Racetrack. Carrasco Hotel & Casino (today, Sofitel Montevideo Casino Carrasco & Spa) reopened in 2013 and was also added to its portfolio of activities. According to the group’s balance, in Uruguay, in 2019, Codere has 2,308 gaming terminals, 6 rooms, 29 betting points and 2 racetracks. Last year, it had revenues of €74.2 million (US$88 million) and EBITDA of €20.6 million (US$24.42 million).

Regarding the Enjoy Group, the company ended its 2018 financial year in Uruguay with gross gaming revenues of US$126.67 million and an EBITDA of US$18 million, 24% below the historical average. In 2019, the revenues of the Gaming segment in Uruguay decreased due to a lower Hold ($4.96 billion). The firm owns the Enjoy Punta del Este room, a meeting place for international tourists and also one of the main Latin American venues for land-based tournaments on the World Series of Poker circuit (WSOP, Partypoker) and the Grand Prix. The company entered Uruguay in 2013 as an operating partner in the then Conrad Hotel & Casino. That year, Enjoy got 45% of Conrad’s share package that belonged to Baluma S.A., controlled by the North American company Caesars Entertainment, for a price of US$139.52 million. Already in 2017, Enjoy acquired 100% of the property. Its license expires on December, 31st, 2036. Since 2013, Enjoy has invested more than US$50 million in improvements to the resort. Currently, it has a casino with 535 slots and 65 table games. The hotel has 294 rooms, 1 convention center, 8 restaurants, 1 nightclub and 1 spa, as well as a place on the beach. 991 employees work in this complex. During 2019, spending on renovations, remodeling and construction of infrastructure improvements increased to promote the destination throughout the year, as well as to attract VIP clients from the United States and Europe, according to Ignacio Sarmiento, general manager of the property. That year, Enjoy Punta del Este was awarded as the ‘Best Casino & Resort in South America’ in the latest edition of the World Travel Awards, a benchmark in the tourism industry worldwide. 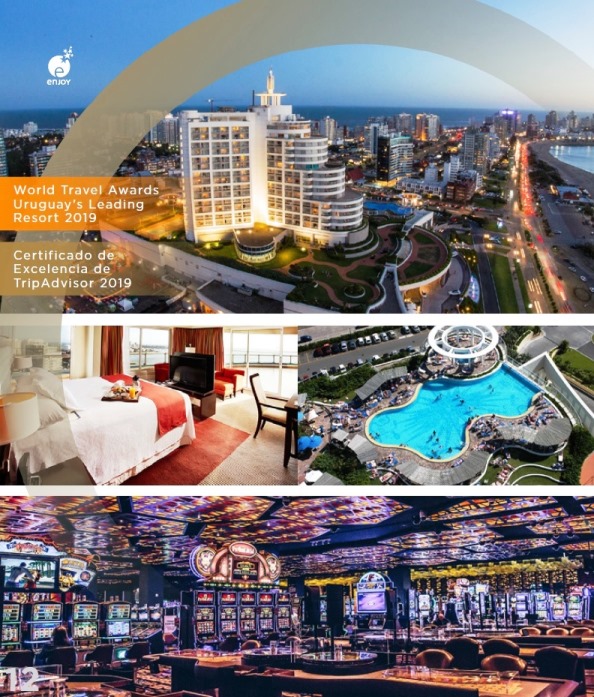 At a general level, the Group had a decrease in revenues and EBITDA in 2019, especially in Chile. This led to a ‘Judicial Reorganization Procedure’ that culminated in an agreement with the creditors. The accepted proposal seeks to maximize the opportunities for recovery and value generation, which will allow the operational continuity of the company and will leave Enjoy with a solid and adequate financial structure for its future development.

THE ONLINE SITUATION
Unlike the gaming market in Colombia, with 18 operators (combining partnerships between local and international companies), in Uruguay, the State is the owner of online gaming. In 2005, it granted a license to La Banca de Quinielas de Montevideo to work in this segment. Thus, for 15 years, under the Supermatch brand, this company is the only one authorized by the Ministry of Economy and Finance (MEF) to operate in the Uruguayan iGaming market. The company offers online betting on real sporting events, as well as virtual sports betting in three disciplines: soccer, ping pong and motorsports. You can also play online (by desktop PC or via mobile) on La Banca’s products: Quiniela, Tombola (a kind of Keno), 5 de Oro (a lottery) and eRaspadita (a scratch game). In line with this work, the Uruguayan Government, through the National Directorate of Lotteries and Pools (DNLQ), developed in recent years a strong strategy of blocking illegal online gambling sites (mostly foreign sites). In 2019, there were more than 450 canceled websites. This favored the growth of Supermatch, which, in 2018, experienced a 48% year-on-year increase, also motivated by the Soccer World Cup in Russia. Precisely, in 2018, there was a milestone for this platform, with the signing of an exclusive agreement with the NBA as the first Latin American gaming partner. Through this agreement, Supermatch uses the official data of the NBA and the brand in its digital sports betting offer and in physical venues throughout Uruguay, as well as bettors have the chance to obtain prizes about the American basketball league.

In relation to online, it can also be mentioned that, last July, the Enjoy Group launched EnjoyWin.Net, Enjoy Club’s digital platform, a successful loyalty program for the gaming multinational. It is a social, free casino, with no bets or prizes or transactions of any kind for money. Through this site, Enjoy tries to attract new generations of players, and to include its current portfolio of land-based clients from their casinos in Chile, Argentina, Uruguay and Brazil. The social entertainment offering has products that can be found in any traditional casino, such as slots, bingo, poker and roulette, all in virtual format. According to Sebastian Truffello, Enjoy’s Commercial Manager: “With this new platform, we are not only listening to thousands of customers who asked us for a recreational platform of this type, but we are also strengthening our position as leaders in innovation within the gaming industry in Latin America.”

POSITIVE REOPENING AND LOOKING INTO THE FUTURE
After two months of closure due to the quarantine forced by the Coronavirus, horse racing activities returned in the different racetracks of Uruguay. Since May, horse racing had an increase of 45% in money collection (with rise in betting from abroad) according to Gustavo Anselmi, head of the DGC. As for the gaming rooms, at that time, both the State and the private companies presented a Biosafety Protocol that was studied and approved in August by the Ministry of Public Health and by a Committee of Experts.

Whoever attends a casino in Uruguay today will notice the strict compliance with this Protocol, with measures that include the following: 50% reduction of total capacity in terms of customer presence; mandatory use of face masks while staying in the rooms; measurement of body temperature for those who will enter and a random control inside the rooms; use of alcohol gel and special mats for cleaning at the entrance; periodic disinfection and sanitization of monitors, keyboards, and chairs; slots located two meters apart from each other; table games with a reduced number of players and no receipt of money (cash) by the croupiers; unauthorized bars or beverage counters; gastronomy services limited to tables of no more than four people. Likewise, there are billboards that invite ‘people at risk’ (older adults, people with illnesses, pregnant women) to refrain from entering the casinos. Beyond the large losses that the pandemic caused to the land-based rooms’ economies, in these first days after the reopening, there have been positive signs in terms of customer attendance. In this sense, Anselmi indicated that, thanks to the good attendance to the rooms, income is already close to 80% of the figures prior to closing.

With regard to the future, there are construction plans for several resorts. First, two major projects to be developed in the departments of Rocha and Canelones stand out. The original idea (stopped by COVID-19) was to call for bids for the construction of luxury hotel establishments with casinos and a marina (in the case of Canelones). In Canelones, the property will be built in Atlantida, which is part of an old desire from this summer place. The plan was for the offers to be known by mid-2021. Now, both in Rocha and Canelones, there are no advances so far. Likewise, in Punta del Este, progress has been made in the bidding process for a new private luxury resort in what was the emblematic San Rafael Hotel.

As has been seen in this report, Uruguay offers a varied and attractive gambling proposal, with lotteries, casinos, gambling rooms, horse racing betting, and sports betting on physical and online events. The market is very well developed and shows one of the highest penetration levels compared to other markets in Latin America. By the way, international tourism is essential for the growth of the activity. The situation of COVID-19 and its effects pose a great challenge for future operations in the country. It will be up to the authorities to be able to generate modern content, according to new technologies and forms of consumption. It has already been announced that they are working on a bill to authorize online casino. This modality, along with others, will help stabilize the sector and strengthen a valuable market that still has a lot to grow.

Notley (Escapology): “Our service is a huge opportunity for any casino to attract millennials”

Notley (Escapology): “Our service is a huge opportunity for any casino...