More than 17 million Italians have played in the 12 months analyzed, following a very detailed and interesting report of local entity IIDEA.

According with the 2019 market and consumer data in Italy, the video games industry is healthy, recording an increase of 1.7% in total turnover of €1.78 billion, compared to 2018. The analysis was provided by the Italian Interactive Digital Entertainment Association (IIDEA). Other numbers are also valuable: hardware had a turnover of €358 million (-15.9% in relation to 2018), while software boasted a +7.3% vs. 2018, with a turnover of €1.4 billion. Above all, digital software is expanding, with a +13.5% and a turnover of €1.13 million. The accessories are instead stable (-0.1% compared to 2018) with a
turnover of €101 million. Regarding hardware, it should be considered that this is a period of transition towards a new generation of consoles. 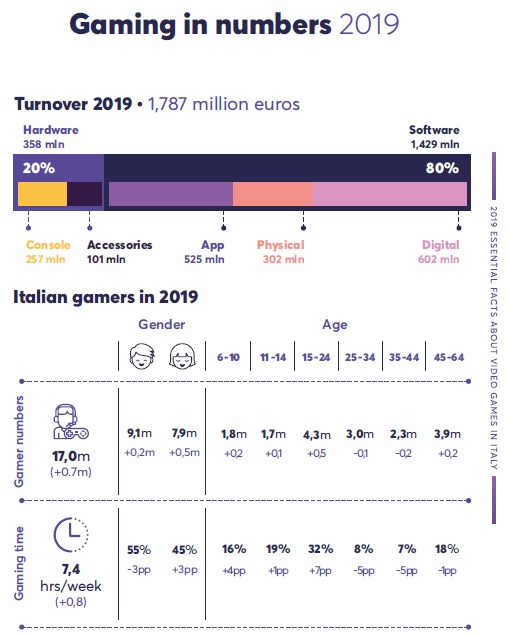 As for video gamers, in Italy, in 2019, there were 17 million people active. That is 39% of the population aged between 6 and 64 years. Of that total, 53% are men and 47% are women (+1% vs. 2018). In terms of age groups, the greatest concentration of players is between 11 and 24 years old. About products, Action, Sport and Shooter are the best-selling video games genres (FIFA 20, Grand Theft Auto V and Call of Duty: Modern Warfare are the most chosen titles). Besides, “Strategy” is taking second place in the PC world. The most used platform is the mobile one (smartphone and tablet), with 10.5 million players, of which 5.6 million are women. There are also 7.8 million people on PC and 6.7 million on consoles. Of course, many gamers use more than one of these platforms to play. Consoles generated an average of 5.4 hours of play per week, exceeding 5.3 per week on mobile and 4 hours on PC. 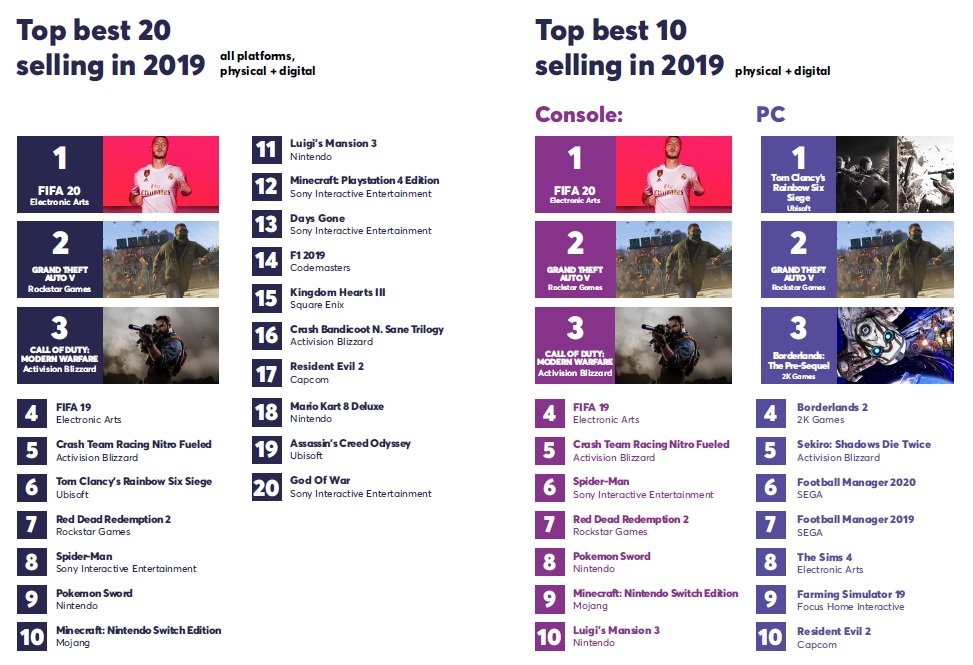 In the opinion of Marco Saletta, president of IIDEA: “The results that emerge from our analysis show an increasingly consolidated relationship between Italians and video games in a moment of significant market evolution. Dynamism is the main feature of the video game industry, which every year can reinvent itself thanks to its extraordinary ability to confront new technological challenges and to cross the boundaries of creativity. Waiting for the new generation of consoles, the video game, whether a pastime, a job or a passion, continues to become more accessible and to consolidate its position as a form of entertainment, involving a growing and diversified number of players in Italy, as in the rest of the world.” 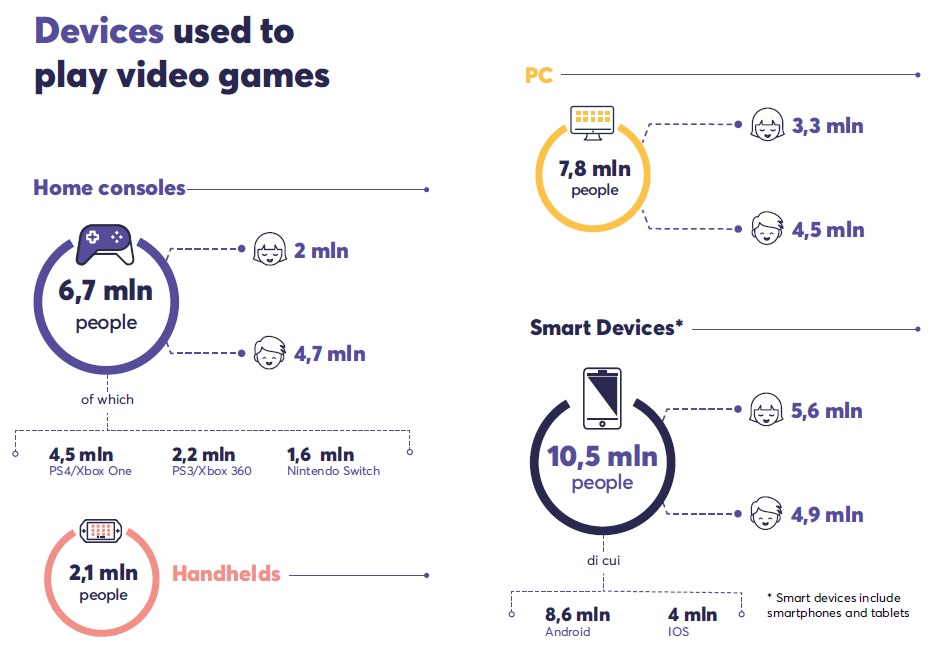 For his part, Antonio Rubio, International Sales Director at B2Boost (a global integration service provider specialized in Business Transaction Management), stated: “The Italian gaming market kept on proving its strength and health during 2019. Despite the slowdown in the sales of hardware linked to the announcement of the new generation of consoles, the good performance of software (physical and digital) confirmed the preference for gaming in the Italian consumers’ mindset. It is remarkable too that the shift towards digital software acquisition has continued, with a strong growth during the past year, thus following a similar trend to other European countries”.

Finally, Eduardo Mena, Research Director of IPSOS, a market research firm, commented: “Video games in Italy grew further in 2019 and today reach almost 4 out of 10 Italians, who play on any device. The approximately 17 million gamers in Italy play on average for 7.4 hours per week (also increasing from 6.7 hours per week in the fourth quarter of 2018), reflecting the fact that gaming is a very engaging means of entertainment. This growth in the number of players and the time spent on video games was the basis of another successful year for the Italian industry in 2019. More players invest more time and generate more revenue in the economy. The entire gaming ecosystem grew to €1.8 billion euros in 2019, impressive results taking into account the current phase of the console cycle, with new devices coming in the next year.”

Tamayo: “We keep on growing in technology, security and gaming proposals”

Garcea (Newgioco Group): “Where we see a good opportunity to expand...

Rusche (Emirat): “We have had massive demand from lotteries over the...