Relevant iGaming and sportsbook platform provider has published its latest Industry Report on this very attractive territory for the online gaming sector. The complete material includes key data, stats, an analysis on verticals and players, and other interesting info that explains why this is one of Europe’s most highly performing gaming jurisdictions.
September 7, 2021
Facebook Twitter LinkedIn WhatsApp
Facebook Twitter LinkedIn WhatsApp

Renowned online gaming solutions supplier BtoBet, part of the Aspire Global group, is presenting its ‘Portugal Betting Focus’ document, a profound exploration on the different characteristics of the Portuguese iGaming market. With strong player engagement, a solid and constant growth in recent years and a high level of interest by mainstream brands, Portugal appears as a small jewel in terms of business possibilities for the gaming industry in Europe.

The very insightful text gives a detailed look at some essential aspects of the market, such as a complete overview, data on the sports betting vertical, and info about players’ betting preferences and engagement. The report also analyses the market’s performance in relation to the COVID-19 pandemic, and how this has affected the volumes for the local sports betting and online casino sector.

With a population of only 10.18 million people, the country registers one of the highest player engagement in the European continent. There are 8.58 million of Internet users (84.2% of the total population), an increase of 0.7% from 2020 to 2021. Besides, the country has a mobile connectivity of 155.1%, considering that there are currently 15.8 million mobile connections. When it comes to device ownership, 98% of Internet users aged 16 to 64 own a smartphone, 84.9% have a laptop or desktop computer, and 50.9% possess a tablet. With Internet users spending 7 hours and 20 minutes each day on the web, this is a higher number than other Western European countries such as France. In relation to mobile Internet usage, the daily time of 3 hours and 7 minutes from Portuguese individuals is higher than the average of Internet mobile time spent in other relevant European territories.

According to Portugal’s regulator Serviço de Regulação e Inspeção de Jogos (SRIJ), in Q2 2021, the gross gaming revenue generated by the online casino and sports betting verticals amounted to €125 million, an increase of €56.3 million than that recorded in the same period of 2020. This represents an 81.9% year-on-year increase, primarily due to a 224.5% jump in sports betting revenue for that compared period. In fact, gross revenue from sports betting amounted to €67.5 million, representing 54% of the total GGR.

Pandemic has also affected these indicators. SRIJ pointed out that, in the months prior to the disruption of the sports calendar due to the onset of the COVID-19 pandemic (January and February 2020), the gross gaming revenue of sports betting averaged that recorded for the preceding months. However, the authority said that a sharp fall was registered from March 2020 onwards, with April recording the lowest bet volume placement, amounting to €7.7 million. This sharp decline reflected the suspension of all sports activities due to the worldwide restrictions imposed by governments.

In fact, the financial data provided by the SRIJ shows that March 2020 represented a fall of €25.8 million in bets placed when compared to February, with April 2020 registering a further decrease of €23.1 million in the volume of bets when compared to March. 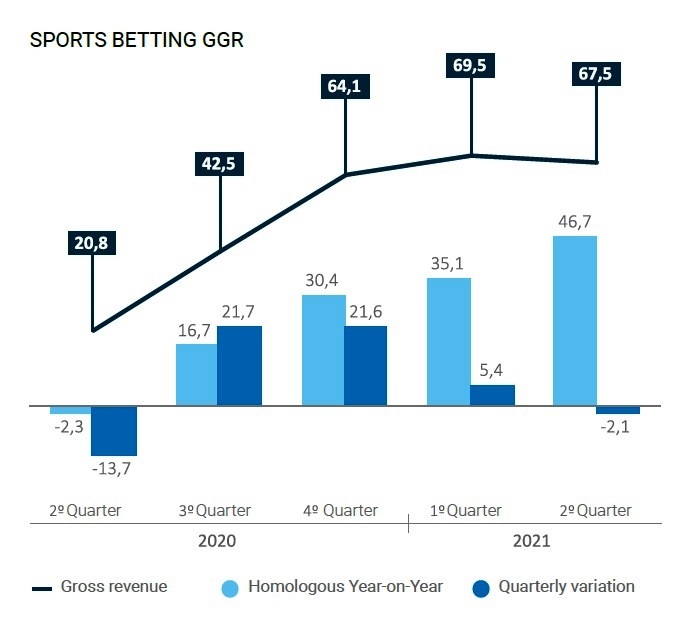 By competition, the Portuguese Premier League contributed with 25.6% of the volume of bets placed in the sport, followed by the Spanish La Liga (14.3%), the German Bundesliga (8.6%), the English Premier League (5.9%) and the Italian Serie A (5.8%).

In the meantime, the GGR for the first six months of 2021 amounted to €253.3 million, with online sports betting maintaining a predominant market share, with €137 million when compared to the €116 million generated by online casinos. Online sports betting generated a GGR of €69.5 million during the first quarter of 2021, with Q2 registering a slight decrease of 3% with its €67.5 million. The GGR produced during Q2 is further significant when taken in contrast of that measured during Q2 2020, which was heavily impacted by the disruption of the sports calendar. In fact, whilst the gross gaming revenue for online sportsbook during Q2 2020 amounted to €20.8 million, this augmented by 224.9% to reach the €67.5 million registered in April and June this year. 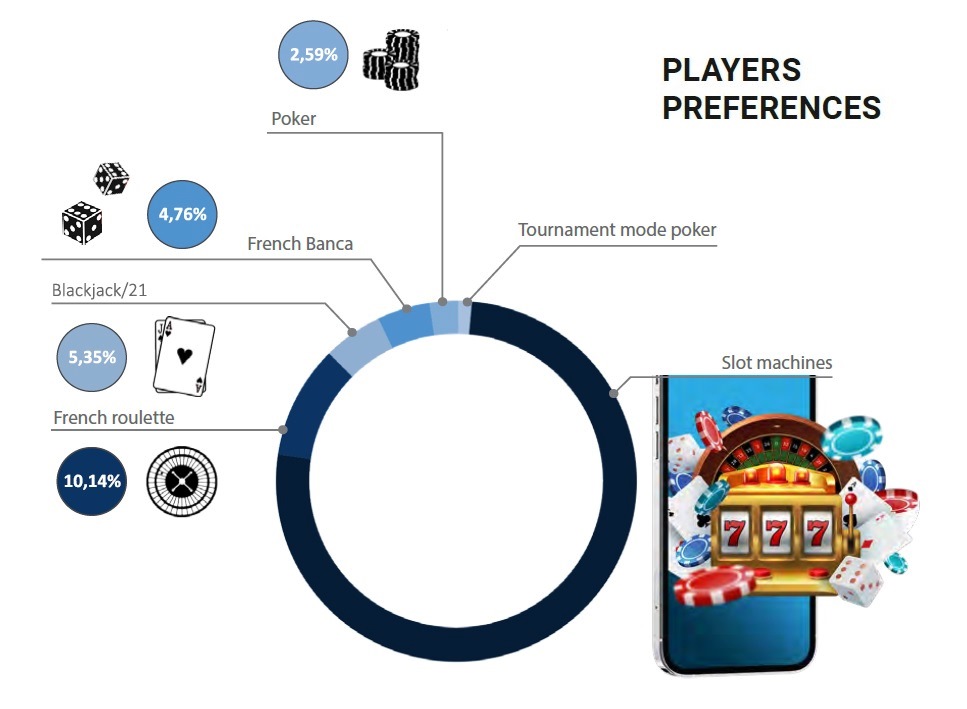 Slots, with 76% of the total volume of bets placed, were the most preferred game of choice for players when it comes to online casinos. In turn, bets on French Roulette represented 10.14% of the total, followed by Blackjack/21 with 5.35%, French Banca with 4.76% and Poker with 2.59%.

During Q2 2021, there were around 653,200 players who placed at least one bet or stake in online sports betting or online casino. This resulted in a decrease of 15.2% in player engagement when compared to Q1 2021 (770,500). Of the total number of players who were active during Q2 2021, 39.9% placed their bets exclusively on sports betting, with 26.2% playing only on online casinos. On the other hand, 33.9% of the players engaged themselves in both online sports betting and online casino. The data published by the SRIJ also revealed that the number of players who only engaged themselves in sports betting increased by 4.5% when compared with the previous quarter. In the meantime, there were 151,900 player registrations in Q2 2021, a decrease of 177,600 registrations in relation to the previous quarter (329,400 new player registrations).

Besides, when taking into consideration players by age, as of June 2021, 60.9% of the total number of players was between 25 and 44 years. Those players falling between the 18 and 24 years old bracket represented 22.4% of the total registered players. Regarding the new registrations that occurred in Q2 2021, 63.3% of them reported to players under the age of 35 years. Also up to June 2021, there were 93,600 registered players who were self-excluding from gambling and betting. This results in an increase of 7,500 players from those in Q1 2021.

To have full access to this comprehensive report of BtoBet, you just have to click on this link and complete the form with your data.