Global gaming industry will worth USD 321 billion by 2026

A report from PwC shows great increase in VG revenue, with strong indicators and enthusiastic future perspectives for this segment. In this sense, total video games income (excluding Esports) reached USD 214.2 billion in 2021, with this number rising at an 8.4% CAGR for the following 5 years.
August 12, 2022
Facebook Twitter LinkedIn WhatsApp
Facebook Twitter LinkedIn WhatsApp

In its 23rd year, relevant consultancy firm PriceWaterhouseCoopers (PwC) presented its Global Entertainment & Media Outlook Perspectives Report, which examined a deep collection of proprietary entertainment and media industry data and forecasts. The result was a unique body of intelligence and foresight that companies and investors all over the world can rely on as they plot strategy and action. 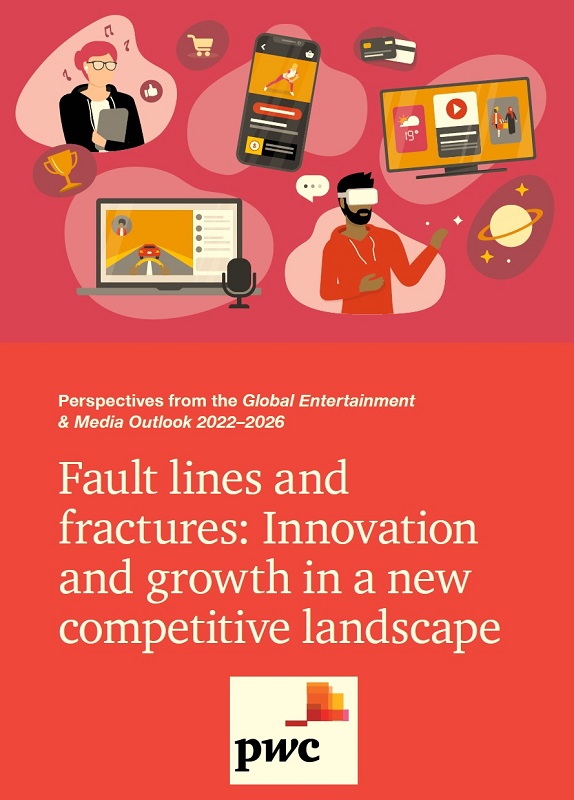 About the gaming segment, this was among the sectors experiencing the most significant growth. In 2021, total video games revenue (excluding Esports) reached USD 214.2 billion. Estimations from PwC’s experts say this sector will expand at an 8.4% CAGR to USD 321.1 billion in 2026. In 2017, global video games made up a mere 6.1% of total Entertainment & Media (E&M) spending. By 2026, they will account for 10.9%, as the niche becomes more mainstream. Revenues will be bolstered by rapidly increasing investment in in-app advertising. China and the U.S. represented around half of global gaming and Esports revenues in 2021. 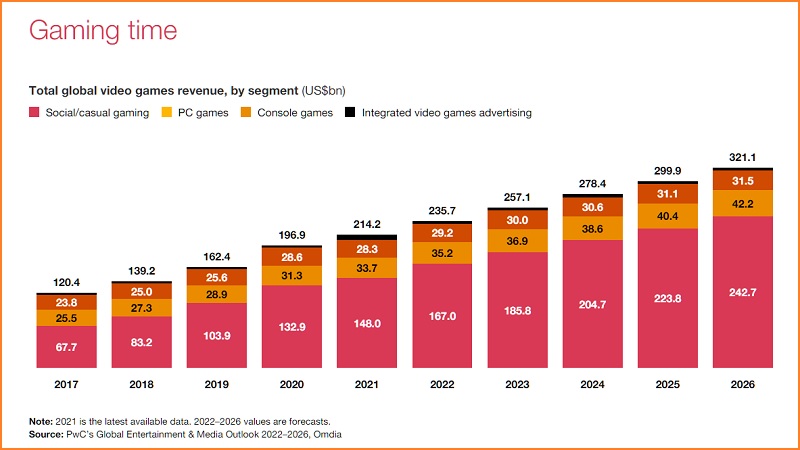 Generally speaking, the expansion is being driven by social and casual gaming after millions of people picked up their controllers to escape the boredom and isolation of COVID-19 lockdowns. Many players believe gaming helped their mental health during lockdowns. A survey of European gamers suggested 16% felt this way, with those spending time on multiplayer genres feeling especially positive.

So many existing and new gamers splashed out on games, consoles and other kit during the pandemic that the market expanded by 26% between 2019 and 2021. Some games were boosted by perfectly timed launches. Nintendo’s Animal Crossing: New Horizons came out in March 2020 and sold 13.4 million units in its first six weeks. It has gone on to become one of the best-selling Nintendo Switch games of all time. 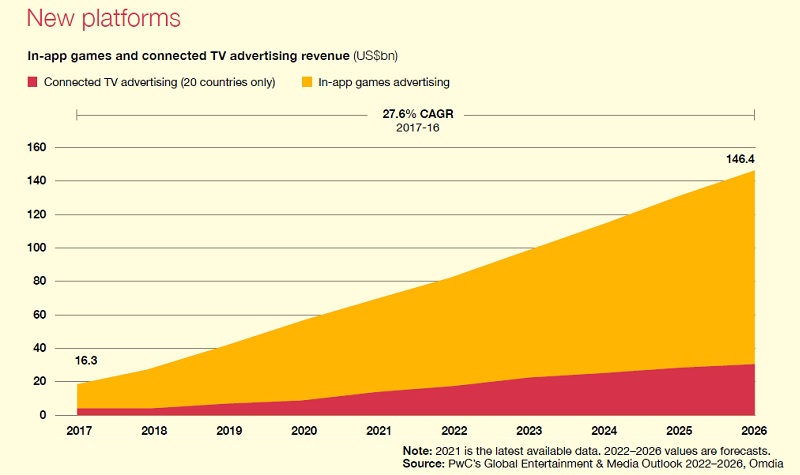 Although the long-term performance of the gaming sector looks strong, the kind of spending spree seen during pandemic lockdowns can’t last forever, according to UK-based market researchers Ampere Analysis, which forecast a 1.2% decline in 2022.

Regarding future opportunities, huge expectations are put in the metaverse. One obvious starting place is the market for VR, which is one of the smaller segments tracked by the PwC’s Outlook. Buoyed by the success of Meta’s Quest VR system in particular, global spending on VR rose by 36.5% in 2021 to USD 2.6 billion and is projected to increase at a 24.1% CAGR between 2021 and 2026 to reach USD 7.6 billion. The global active installed base of stand-alone and tethered VR headsets is projected to grow from 21.6 million in 2021 to 65.9 million in 2026. Every three days, a new app is listed in the Quest app store.

Because the metaverse is an evolution that may profoundly change how businesses and consumers interact with products, services and each other, its potential financial and economic value goes far beyond VR. In time, many or all of the revenues associated with video games, live music performances, advertising and even e-commerce could migrate into the metaverse. Citibank has announced that the metaverse could represent an opportunity of between USD 8 trillion and USD 13 trillion through 2030.