Igaming and platform developer Vibra Gaming announced the long-awaited launch of the online slot Condorito, based on the adventures of the legendary Chilean cartoon character. The product includes numerous elements of the comic strip, such as the typical “Plop!” and several figures that accompany the famous condor, like Yayita, his eternal lover, his rival Pepe Cortisona and his great friends Huevo Duro and Garganta de Lata.

The world depicted in this comic is the source of inspiration for this title. On the main screen of the game, the city of Pelotillehue is represented, a fictional place where Condorito’s adventures take place. It has more than 12 symbols that show diverse characters and key elements of the story. The main screen has also series of special features that provide greater variety to the game experience, while highlighting different situations of the story. Such is the case of one of the features in which Condorito and Pepe Cortisona compete for Yayita’s love. Another example is the wild with the Condorito symbol, which unexpectedly appears in different places on the main screen, with its classic “Plop”, replacing symbols to give multiple prizes.

In the free spins bonus, the screen changes completely, showing the Pelotillehue FC soccer field. There, Condorito and Pepe Cortisona will face each other in a fierce soccer match with excitement and great prizes for the player. 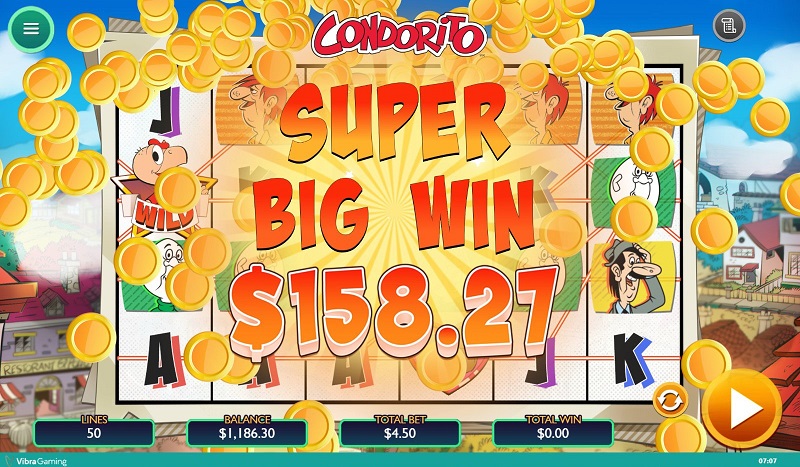 The comic strip was first published in 1949 and, since then, it has continued to grow until becoming one of the most widely read in Latin America. Condorito has been a real success in every sense in different countries. In Colombia, it became the most widely read magazine, and in Chile, its country of origin, it is recognized as the real or fictitious character of greatest spontaneous recall. Based on its story, fortnightly, special and luxury editions were published, as well as millions of views on its social media, licensed products for mass consumption, and even an animated film. In this way, the beloved Condorito created by René Ríos, better known as “Pepo”, managed to become a synonym of popularity and success.

Ramiro Atucha, CEO of Vibra Gaming, highlighted: “We have been getting ready for this launch, probably the most anticipated of the entire year, for several months now. We are grateful to the whole team of World Editors Chile for entrusting us with this license, and to our own staff for great job done. It is a pleasure for us to bring Condorito to the world of online slots.”

Meanwhile, Christian Zuñiga, New Business Manager for Chile and LatAm at World Editors Chile, stated: “We are glad to work with a renowned and outstanding company in Latam such as Vibra Gaming. We have been able to witness the passion they give to each of their creations. We trust that we are leaving Condorito and his friends in great hands”.