In order to better understand, anticipate and comply with an ever-changing regulatory landscape, business data supplier VIXIO GamblingCompliance has been analyzing the iGaming horizon across the region to identify some key areas and processes to take into account.
September 2, 2021
Facebook Twitter LinkedIn WhatsApp
Facebook Twitter LinkedIn WhatsApp

Over the last years, Latin America has slowly become a strategically important region for iGaming operators and suppliers seeking out growth opportunities in newly regulating markets. Following the lead of Colombia, other countries such as Peru, Brazil, Chile, Panama and various provinces in Argentina are implementing regulatory regimes for online gambling products, with major European-based operators either pursuing licenses or partnerships with local companies.

In this sense, VIXIO GamblingCompliance, a provider of independent legal, regulatory and business intelligence to the global gambling industry, has developed a ‘Latin American Online Data Dashboard’, based on legislative assumptions, from which estimates that online gambling revenue in Latin America will reach USD 2.6 billion by 2025. 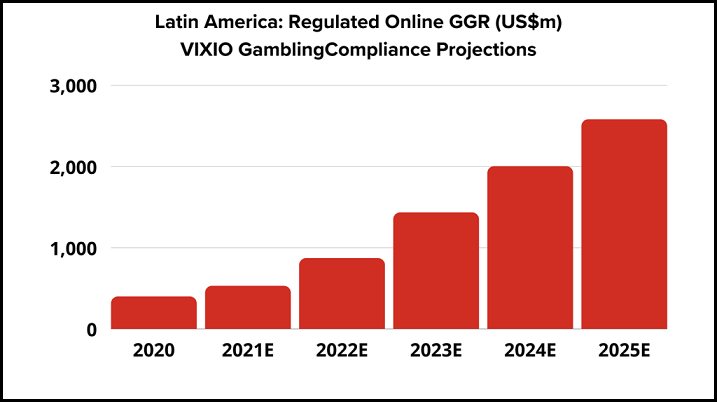 A REVIEW OF THE CURRENT SITUATION IN THE MAIN MARKETS

The company decided to focus on four markets: Colombia, Brazil, Argentina and Chile. About Colombia, the report considers that, four years after the launch of regulated online gambling, this interesting, evolving market has recently attracted a trio of powerful new entrants in the shape of Entain’s bwin, Flutter’s Betfair and William Hill. Can the leading European operators capture meaningful market share, or will local heroes Betplay and Playtech-powered Wplay continue to dominate? Meanwhile, online casino is set to become more important in the heavily sports-centric Colombian market, in part due to the adoption of regulations in 2020 to permit live-dealer games. 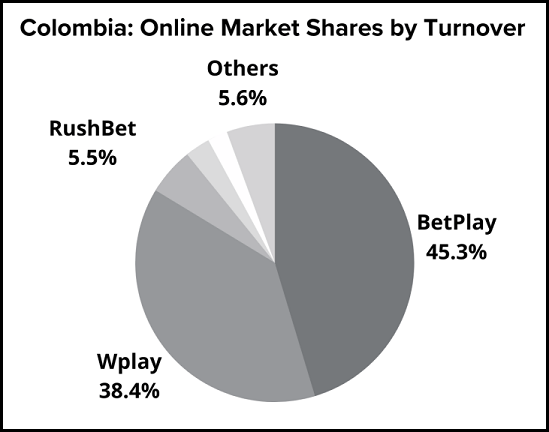 Regarding Brazil, if this market is going to have its national sports betting market up and running in time for the 2022 World Cup, then H2 2021 appears to be a critical period to make progress in establishing a concession or licensing system. Two-plus years after the legislation was passed, specialist consultants are being hired to make recommendations on the regulatory model, upfront fees, selection criteria and potential legal amendments, ahead of a bid process to be steered by the national development bank. Notably, the Brazilian market received a boost in July through legal amendments that mean operators will no longer face a 3% turnover tax for online betting (6% for retail), but a blended tax based on turnover and gross revenue that should equate to an effective rate of around 18-20% of GGR.

The slow progress towards implementing December 2018’s sports betting law has now opened the door for Brazil’s 26 states to introduce their own markets after the Federal Supreme Court last September 2020 ruled that states and municipalities were entitled to offer permitted lottery games, which now includes fixed-odds sports betting, within their borders. Populous Sao Paulo, Rio de Janeiro and Minas Gerais are among states wasting little time in capitalizing on the opportunity, with Brazil’s future national licensees seemingly set to face at least some state-level competition. Key questions include whether states will issue one or more concessions to sports betting operators or merely seek partners to support lottery-run operations. Elsewhere, there is the legal question as to whether states must abide by the payout restrictions set by federal lottery law, meaning a 65% payout for instant iLottery games, and effective tax of around 20% for online sports betting. 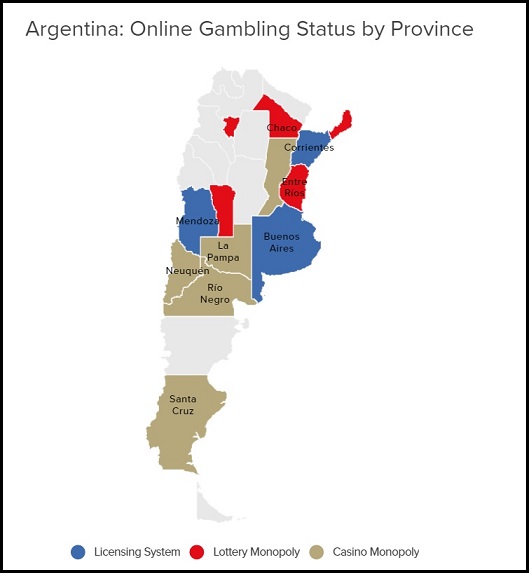 In Argentina, just like US states for sports betting, provinces are trending in various different directions when it comes to regulating online gambling. According to research carried out by VIXIO GamblingCompliance, the 14 of 24 Argentine jurisdictions with legal online gambling are evenly split between those with government-run lottery monopolies, those that have authorized incumbent land-based casinos as exclusive operators, and those that have now established licensing regimes. Even in the latter case, provinces are on different pages when it comes to requiring international operators to have local partners or issuing a limited number of permits versus adopting an open licensing system. With any move to establish a Spain-style national system likely to be a politically confronting endeavor, the next critical step in Argentina’s development will be the launch of online gambling by leading international operators in the Province and the City of Buenos Aires, that account for well over half the country in GDP terms.

Finally, Chile is presenting different challenges. The Ministry of Finance’s January 2021 pledge to soon introduce legislation for online gambling makes Chile a leading candidate to be the next Latin American market to regulate. However, legislative efforts appear to face at least two formidable obstacles. First, there is a hostile dispute between most of Chile’s land-based casino operators and the Government over a license tender process that casinos claim is illegitimate, because their licenses should be automatically renewed. Then, there is the fact that 2021 is an election year, with the presidency and congressional seats up for grabs in late November. The two challenges are also connected by the charges made by opposition politicians that incumbent President Sebastian Piñera has been a financial beneficiary of government policies designed to favor Santiago-listed casino operator Enjoy.

As for Mexico, it permits land-based licensees to operate online; however, online gambling is not specifically regulated and a bill that would change that has been stalled in the National Congress since 2014. Meanwhile, in Peru, a legislative proposal from the regulator is being developed and is expected to be introduced on the next year.

Anyways, the often unpredictable legislative landscape of Latin America is currently witnessing a spike in efforts to regulate online gambling. With the population of the continent standing at over 600 million, there’s a huge audience out there, and people have a strong appetite for gambling. That’s why, despite its politic and economic difficulties, this region is still an attractive, strategically important emerging market for the iGaming sector, with lots of operators trying to leverage new business opportunities.