A key survey from the NPD Group and the Entertainment Software Association concludes 66% of U.S. citizens involve in gaming activities, while 83% say they play with others online or in-person. Of the total respondents, 71% were white, 52% male and the average age of players is 33-years-old.
June 9, 2022
Facebook Twitter LinkedIn WhatsApp
Facebook Twitter LinkedIn WhatsApp

The new 2022 Essential Facts report uses data from a survey of nearly 4,000 respondents conducted by the NPD Group. The study is a work from the Entertainment Software Association (ESA), the voice and advocate for the U.S. video game industry. 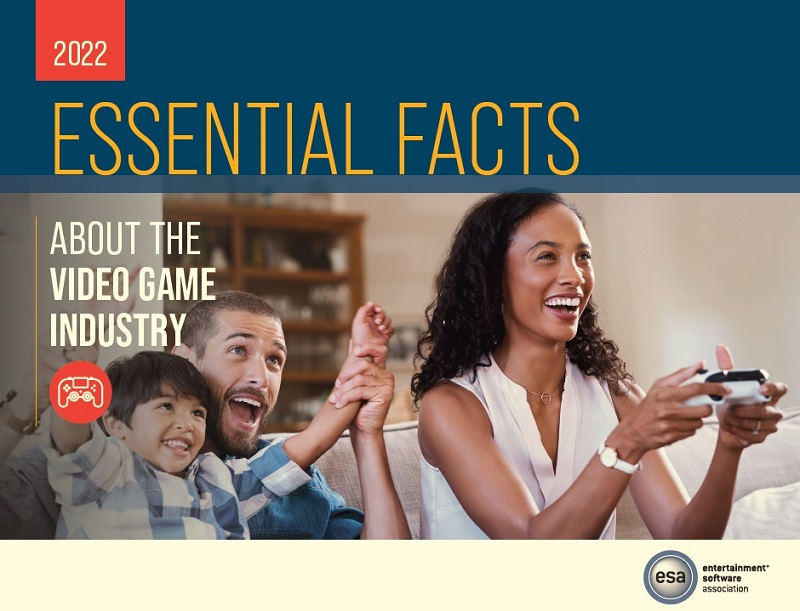 A total of 66% of Americans, or 215.5 million people, play video games and attitudes toward games have gotten more positive during the pandemic: 97% of all Americans now see the benefits of video games. The report says people believe that video games have brought mental health benefits in the COVID-19 era. Besides, 89% of players affirmed video games provide stress relief, while 88% stated video games help improve cognitive skills. 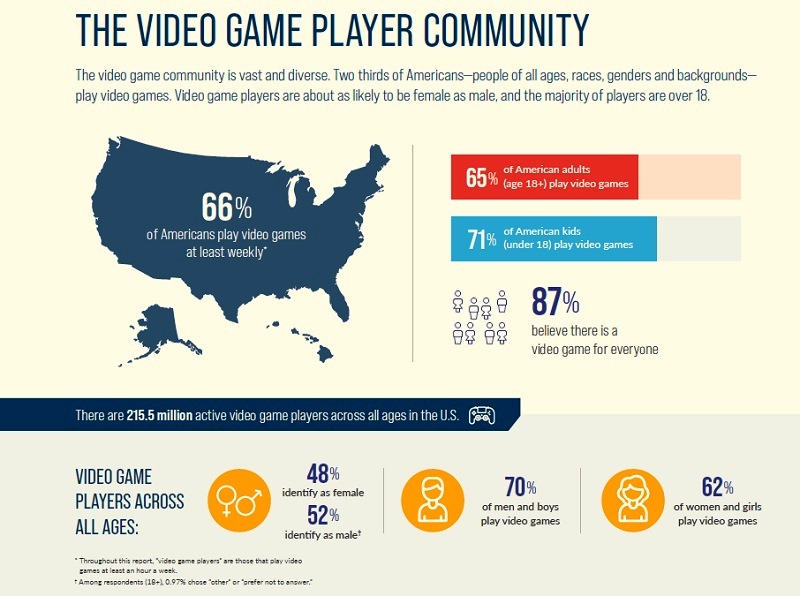 48% of people whom play games identify as female (52% male) and 29% of game players are people of color. The ESA shared that the average age of video game players is 33-years-old. The 18-year-old to 34-year-old range remains the sweet spot for gaming. 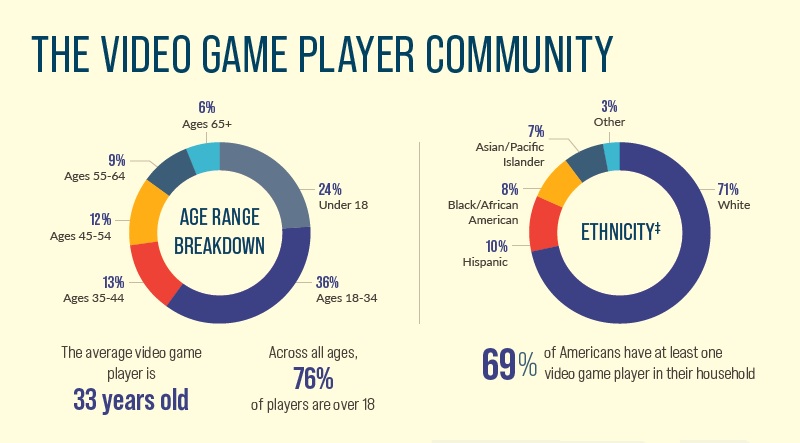 Smartphones are the most common device for playing games: 70% of players use their phones for play, while 18% solely use their phones. Casual genres, such as matching, brain puzzles, party, music and dance, and exercise games, continue to be the most played. 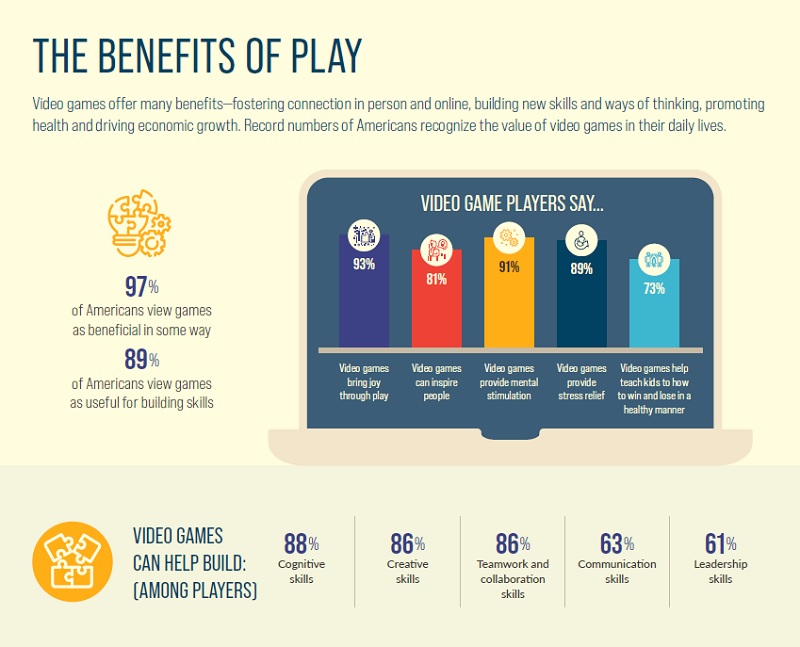 Gameplay time continues to rise among players, with average weekly time at 13 hours, up 7% from 2021. People who play games for 3 hours or more made up 78%, while 53% assured they spent 7 hours and up, and 22% said that they play 1 to 3 hours a week. Other notable results include: 69% of households have at least one video game player and nearly one-third of adult video game players are parents.

The ESA’s 2022 consumer survey was conducted using an online methodology. A 15-minute questionnaire was completed by a representative sample of 4,011 U.S. consumers ages 18 and older in February 2022 (margin of error +/- 2%). 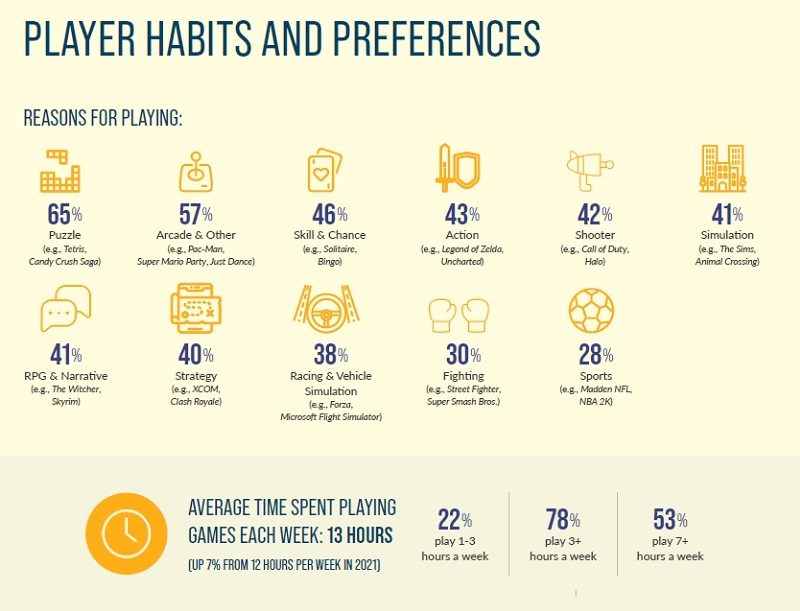 Speaking about the results of this study, Stanley Pierre-Louis, CEO at ESA, considered: “We’re really excited about the numbers revealed for this year. Americans of all ages and demographics are playing games. They view video games as a force for good, an activity that has benefits on various aspects of their lives. In an age of social life isolation, video games proved to be an important piece of solace for people.” 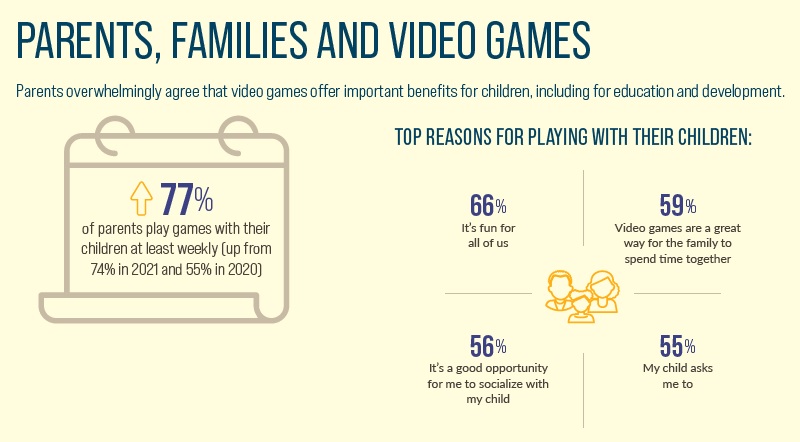 About video games as a connecting tool, he highlighted: “83% responded they are playing games online with friends and other people. Besides, we’re seeing more families playing together. Parents overwhelmingly view video games as offering important benefits for children, particularly with respect to education and personal development. It is really heartening that 77% of parents play games with their children at least once a week.”