A VIXIO GamblingCompliance report analyzes the expansion in the approval of sports betting in different territories of the country, the different betting models that are applied in the states, the situation of the Indian tribes, and the interests of sports teams in participating in this business.
July 15, 2021
Facebook Twitter LinkedIn WhatsApp
Facebook Twitter LinkedIn WhatsApp

After legislative discussions and sportsbook operations were disrupted by the pandemic in 2020, the U.S. sports betting market continued its strong rebound in the first half of 2021 as revenue growth accelerated, more than a half-dozen states joined the post-PASPA club, and three of the “big four” states in New York, Florida and California took major steps toward legalization or expansion.

In this sense, VIXIO GamblingCompliance, provider of independent legal, regulatory and business intelligence to the global gambling industry, has shared its ‘U.S. Sports Betting: 2021 Halftime’ report. The study analyzes some key trends from H1 2021 and anticipates possible scenarios for the U.S. gaming market evolution in the second half of this year. 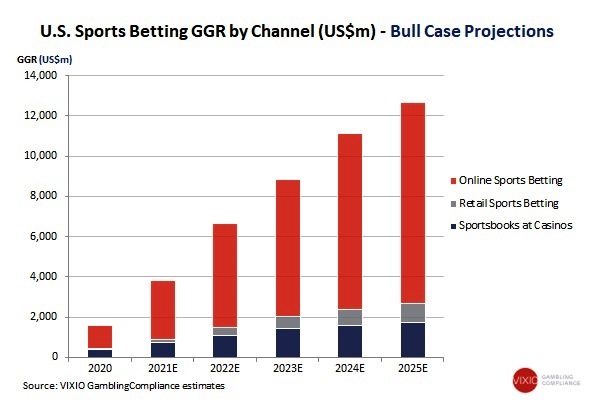 According to VIXIO GamblingCompliance estimates, total U.S. sports betting gross revenue through the first four months of 2021 was US$1.25 billion, up 363 percent year-over-year. The sharp increase was driven not only by the absence of sporting disruption caused by COVID-19, but also fast starts in new markets such as Michigan, Tennessee and Virginia, plus strong underlying growth in the somewhat more mature jurisdictions of New Jersey, Indiana and Pennsylvania.

Based on the company’s latest forecasts, which are updated monthly, it projects total revenue to reach US$9.4 billion to US$12.7 billion by 2025, depending on whether legislative and regulatory trends align with base-case or bull-case scenarios. Reflecting strong legislative momentum and market performance, those numbers have seen a significant upgrade from the US$7.3 billion to US$10 billion forecasted in early January.

At the halfway point of the year, a total of 8 states have already legalized sports wagering (South Dakota, Wyoming, Arizona, Maryland, Florida, Nebraska, Connecticut, Louisiana). New York has passed legislation for online sports betting, albeit under a regulatory structure that few would have predicted at the start of 2021. Maine and Ohio have made significant progress towards enacting bills. Meanwhile, Connecticut has authorized online casino games in addition to mobile sports wagering. The pace of adoption for iGaming is set to remain a lot slower than online sports betting for the foreseeable future, despite the legislative breakthrough in Connecticut.

Regarding H2 2021, with their state legislatures in session for several more months, Massachusetts and Ohio are about to legalize sports betting. On the iGaming front, it will be interesting to see how major casino interests respond to draft regulations, to permit interactive casino games in addition to online poker in Nevada. 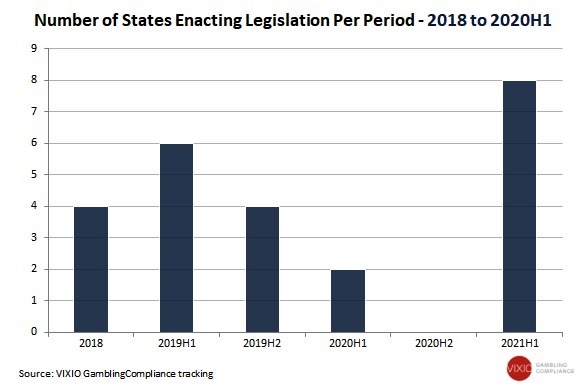 ABOUT MARKETS AND MODELS

U.S. states are now ripping up the New Jersey playbook of tying licenses to land-based casinos and requiring specialist online sportsbook operators to partner with incumbent gaming interests as their ‘skins’. Despite state constitutional restrictions, New York bypassed its land-based casinos for mobile sports betting, with potentially just two standalone licenses available through a competitive bid process. Maryland is likewise enabling online operators to secure their own licenses without a casino partnership, but with up to 60 available under the state’s more expansive law. Pending federal approval, Florida will also be running all online sports betting through platforms controlled by the Seminole Tribe, with any partnerships struck on radically different terms to skin agreements in New Jersey, Pennsylvania and other states.

Future doubts have to do with operators that will emerge as the victors from New York’s RFP process, amid the prospect of major brands teaming up through a series of joint bids. Moreover, to know if Massachusetts and Ohio will follow the trend of decoupling sports wagering licenses from incumbent casinos.

In January 2021, a key trend was emerging. We are referring to the different legal pathways for how Indian tribes would participate in online sports betting. Now, this possibility is clearer, thanks to regulatory developments in H1 2021. The first few months of the year have seen both Arizona and Connecticut follow Michigan’s model, by allowing tribes to conduct sports wagering in their tribal casinos as sovereign governments, but requiring state licenses for mobile betting involving players beyond Indian reservations.

In stark contrast is Florida’s new compact with the Seminole Tribe, which permits the tribe to conduct online sports betting throughout the state via on-reservation servers as a form of tribal gaming subject to 1988’s federal Indian Gaming Regulatory Act (IGRA). If Florida’s compact survives federal and court scrutiny, it will establish a new regulatory model for how mobile sports wagering might be constructed in other major tribal gaming states such as Oklahoma, Minnesota, Washington or even California. If the Seminole Tribe’s path to online betting is blocked, then calls for Congress to update IGRA for the post-PASPA era are likely to be amplified.

Virginia made history in January 2021, when regulators awarded the first sports wagering license to a major U.S. pro sports team in the shape of the NFL’s Washington Football Team and its partner FanDuel. However, Arizona became the first state to adopt that licensing model at scale through legislation that enables all major in-state teams to control access to online betting licenses. While Arizona sports teams will not run their own sportsbooks but instead partner with leading operators as their “designees”, the state’s law breaks new ground in terms of direct team participation in the sports wagering market.

The main question in this regard is whether Ohio sports teams will succeed in their lobbying efforts for similar treatment to their counterparts in Arizona. Meanwhile, H2 2021 should also see more market-access partnerships between teams and sportsbook operators in Arizona, Maryland and potentially Illinois.

Of course, there are many possibilities in different states for the advance of the legalization of iGaming, mobile gaming and sports betting to lead to the expansion of these indicators, in a general market in constant development.