In the ‘Canada Online Outlook,’ research firm VIXIO GamblingCompliance offers excellent insights on the exciting evolution of the iGaming segment in this territory, with data-driven analysis of key trends, the major operators that have already gone live (and the ones that will be included in the near future) in the market and some critical policy points to follow across the country.
May 5, 2022
Facebook Twitter LinkedIn WhatsApp
Facebook Twitter LinkedIn WhatsApp

Ontario launched its competitive online gambling market on April 4th, 2022, which represented a new era for the industry in the region. It was one of the most anticipated gaming moments of the year due to the territory size and open licensing framework. Latest study of relevant data intelligence company VIXIO GamblingCompliance is the Canada Online Outlook. This document delves into the unique possibilities and challenges of the Canadian market, giving a comprehensive overview of the landscape and sharing a forecast on future opportunities on the horizon.

It is Canada’s first competitive regulated market for online gaming and sports betting through a regulatory regime that requires private operators to register with the Alcohol and Gaming Commission of Ontario (AGCO), comply with AGCO standards and sign a commercial contract with AGCO’s iGaming Ontario (iGO) subsidiary. Although Ontario now has an open market for online gambling, the new regulatory regime is not a traditional licensing system per se and is still governed by provisions of Canada’s federal Criminal Code that oblige provincial government agencies to “conduct and manage” any form of commercial gaming permitted in their jurisdictions.

Outside of Ontario, a full range of online gaming products, including casino games and sports betting, is available via province-owned lottery corporations in British Columbia, Alberta, Manitoba, Quebec and New Brunswick. Limited online gaming, including sports betting, bingo and lottery games, but not online casino, is offered by the Atlantic Lottery Corporation in the provinces of Newfoundland and Labrador, Nova Scotia and Prince Edward Island. The Saskatchewan Indian Gaming Authority has also been granted exclusive rights to operate Internet gaming in the province, with an online casino and sportsbook expected to launch during this year. Gambling officials in Alberta have also begun an RFP process to contract with two companies to offer retail sports betting at casinos and other retail locations, as well as through associated online and mobile operations. 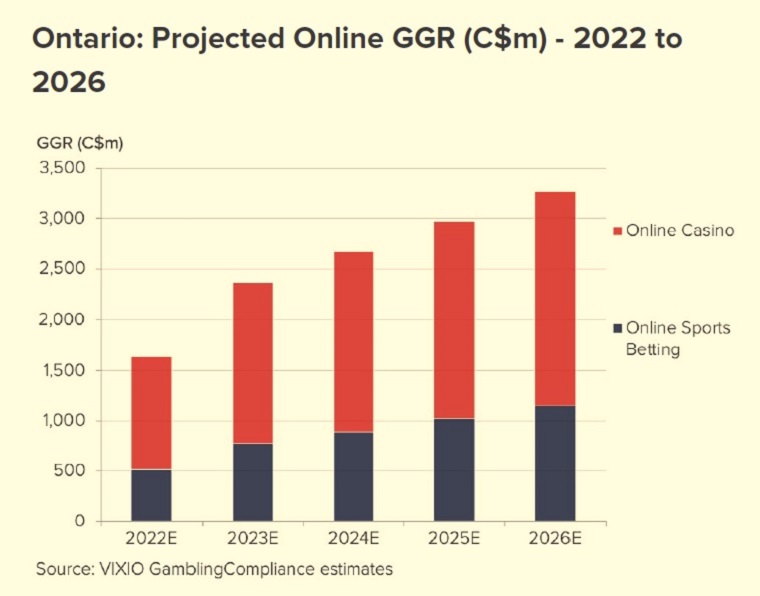 While there were 13 legal operators that went live on day one of the regulated Ontario Internet gaming market (bet365, BetMGM, Caesars, FanDuel, LeoVegas, Unibet, 888, theScore, Royal Panda, Rivalry, PointsBet, BetRivers and Coolbet), a total of 27 operators registered with the AGCO and are waiting to launch, such as bwin, PartyPoker and WSOP, with several dozen operators expecting to offer their services during the course of 2022.

In general terms, for the whole country, the size of Canada’s regulated online market in 2021 was C$1.43 billion (USD 1.11 billion), but will expand to C$5.86 billion (USD 4.57 billion) by 2026. ‘Re-regulated’ competitive markets account for a majority C$3.85 billion (USD 3 billion) of this total under VIXIO’s base case forecast, with Ontario’s C$3 billion (USD 2.34 billion) + fully regulated system predicted to be followed by the introduction of competitive sportsbetting markets in Alberta, British Columbia, Manitoba and Saskatchewan over the next three years. Online casino revenue across Canada’s 11 provinces is projected to climb to C$3.85 billion (USD 3 billion) by 2026, while online sports-betting GGR is forecasted to climb to just over C$2 billion (USD 1.56 billion) in the wake of the legalization of single-event sports betting in Summer 2021. 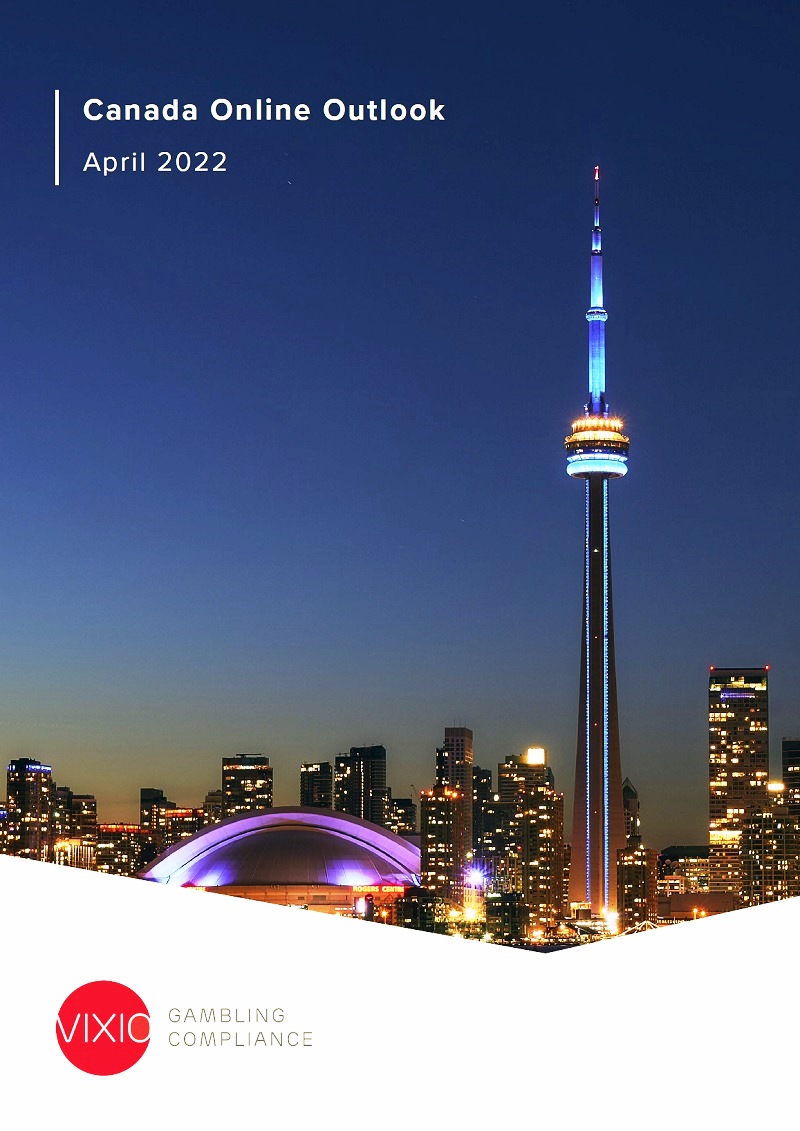 When considering operators, some experts believe Ontario’s re-regulated market will be dominated by international companies transitioning from the pre-existing grey market, ahead of major U.S. sportsbook brands or Canadian media groups. Market contenders can be divided in 5 groups:

a) Offshore Operators: International groups including bet365, Entain, Betway, Pinnacle and PokerStars have been active in Ontario from offshore for years, building up potentially formidable brand recognition and player databases.

b) U.S. Referents: Established U.S. brands FanDuel, BetMGM, BetRivers, PointsBet and a GGPoker-powered World Series of Poker have all received AGCO registrations, with DraftKings waiting in the wings.

c) Made-In-Canada Brands: Penn National’s theScore has the most popular sports media app in Canada, while Toronto Star-affiliated NorthStar Gaming has partnered with Playtech and Kambi to enter the Ontario online market. 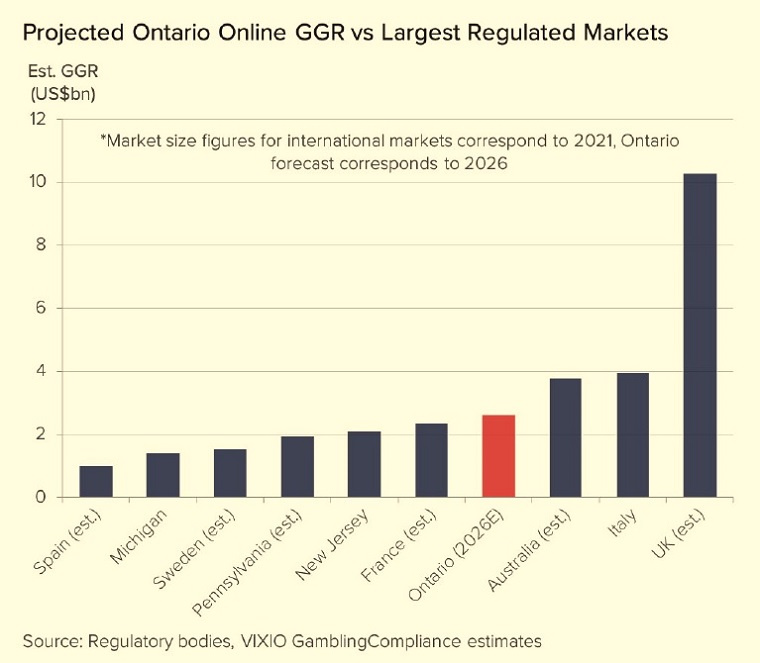 It is also important to take a look at key policy points and challenges. There are various characteristics of Ontario’s regulatory model that mirror jurisdictions in Europe far more than U.S. states that have advanced so quickly in regulating online sports betting in recent years. In addition to the unrestricted number of licenses and some advertising restrictions, both of which are more akin to a European market, AGCO’s regulatory standards include specific technical restrictions on the design of online casino games that appear to have been borrowed from those of the UK, with a clear emphasis on responsible gaming protections. Conversely, Ontario sportsbooks are not confined to a list of approved wagering events, as they are in the vast majority of U.S. states, and instead can offer betting on almost any sports and novelty events as in the UK and most European countries bar France, Portugal and Germany.

One of the most notable European-style features of Ontario’s regulatory standards is a ban on the inclusion of gambling inducements, such as a bonus offer or other incentive to place a bet, in any public advertising. Instead, welcome or deposit bonuses or free bets can only appear on the website of the operator and be offered directly to registered players who have opted in to receive them. According to AGCO guidance, the restriction on bonus offers should apply to affiliates just as it does to operators themselves, but it remains to be seen whether operators will try to find other workarounds, and how strictly the rule will be enforced.

Unlike in the pre-existing grey market, registered Ontario operators are not permitted to pool liquidity with other jurisdictions, a restriction understood to emanate from legal concerns on the part of the Ontario attorney general’s office. Although this isn’t especially problematic for sports betting or casino games, it is bad news for poker and fantasy sports contests in particular. FanDuel and DraftKings both stopped offering fantasy games in the province prior to the April 4th launch. They cited the inability to pool Ontarians with contests offered in the U.S. and other markets, as well as heightened regulatory standards given that fantasy sports will be regulated akin to sports betting in the province (which is not the case in U.S. states). For poker, meanwhile, Canada and Ontario have traditionally been key markets for the likes of PokerStars and PartyPoker, and those operators will now have to offer poker tournaments on a much smaller scale given only players based in the province will be able to compete in them.

While attractive overall, Ontario certainly is not lacking in complexity from a compliance perspective and the scores of interested operators are set to be tested over the coming months, as they bid to quickly join the re-regulated market alongside the early runners. The unique requirements of Canadian federal law mean operators have to deal with not one but two government agencies (AGCO and the independent iGO subsidiary) to fulfill the conduct-and-manage obligation of the province. Further, the newness of the Ontario regime means divisions of responsibilities between AGCO and iGO in very specific areas may still be being worked out as operators start to go live and the new regime is bedded in. 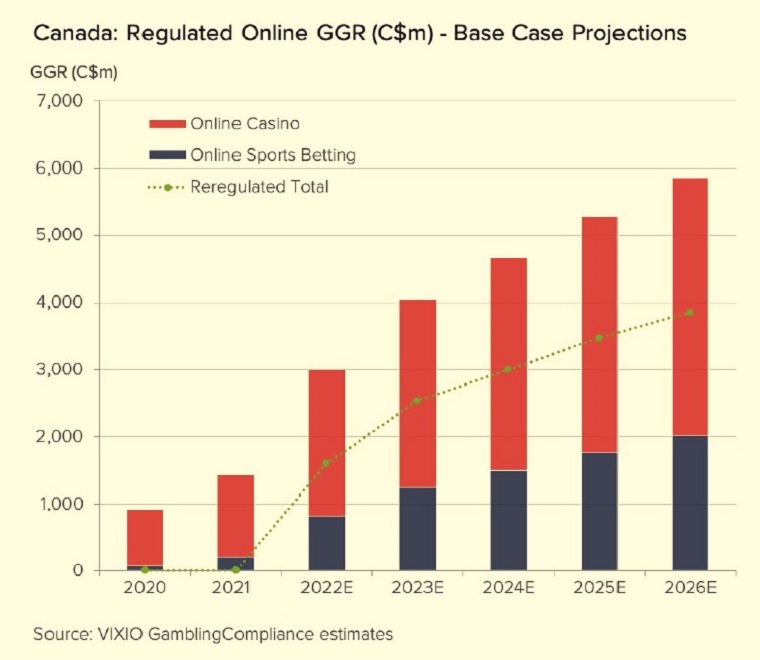 LEGALITY AND OTHER CANADIAN PROVINCES

Ontario has been clear in its policy goal to encourage existing grey-market operators to transition to its legal market, with no obligation for them to cease activities prior to becoming registered and going live and only limited regulatory impediments such as additional account verification steps for players and an inability to carry over unsettled bets to their newly regulated Ontario platforms. Approved operators, in turn, are able to remain active in other Canadian provinces on an unregulated/offshore basis, without compromising their suitability for an Ontario registration. Still, there are no guarantees that other provinces that come to adopt an Ontario-style model would be quite so permissive relative to established offshore providers and it is at least conceivable that ongoing unregulated offerings in other provinces could be problematic down the road.

After Ontario’s launch, the multi-billion Canadian dollar question is how quickly other provinces will follow suit. Much will depend on the initial success or otherwise of the Ontario model, with little reason to believe that provinces will immediately rush to open their own online markets simply because Ontario has done so. For one thing, provinces may look to evaluate the impact of single-event sports betting, available only since last summer, to judge the competitiveness of their lottery corporations under the current monopoly model versus an Ontario-style system, while each province appears to have its own unique policy challenges as well. Alberta is probably the most likely contender to follow Ontario’s lead, with the province having already taken an initial step to contract with a pair of sports betting providers to operate in the market and compete with the PlayAlberta online gaming platform. Ultimately, it is likely to take several years at least before the rest of Canada opens up to those newly registered Ontario operators.