The 2021 season has ended with a smile for gaming manufacturers, publishers and players. In terms of the UK, sales numbers (hardware and software) were positive in the whole year for this sector, although indicators for the last weeks of December weren’t quite satisfying. In this sense, recent data from GfK research study showed that after being crowned Christmas No.1 game the week before December 25th, 2021, FIFA 22 held that position right up until the big day itself, with sales up 13% week-on-week. However, sales fell 63% over the following seven days, causing EA’s football game to tumble to No.2.

In the week after Christmas, boxed games sales typically tumble quite hard as the festive sales window comes to an end. Overall boxed game sales were down 40% last week. But Nintendo Switch games did comparatively well, which isn’t a huge surprise, considering the console was one of the top-selling Christmas products. The Switch exclusive Mario Kart 8: Deluxe only declined 16% in sales after Christmas, which means it claims the final No.1 spot of the year. It’s the seventh time the game has been No.1 in the UK box charts since its launch in April 2017. Meanwhile, Animal Crossing: New Horizons only suffered an 8% sales drop in the post-Christmas week, and that game rose from No.7 to No.3 as a result. 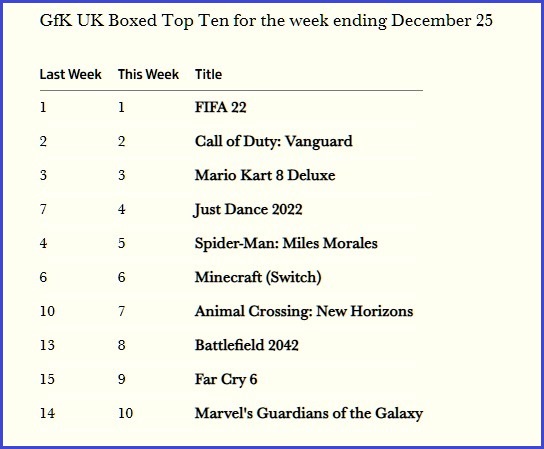 MOST SUCCESSFUL TITLES OF THE YEAR

The week before Christmas, Call of Duty: Vanguard held its No.2 position despite a 7% drop in sales, but after Christmas, it had a similar descent to FIFA (down 64% week-on-week), and the Activision game currently sits at No.5. Other title in the Top Five is Spider-Man: Miles Morales, which continues to sell well alongside new PS5 console stock. 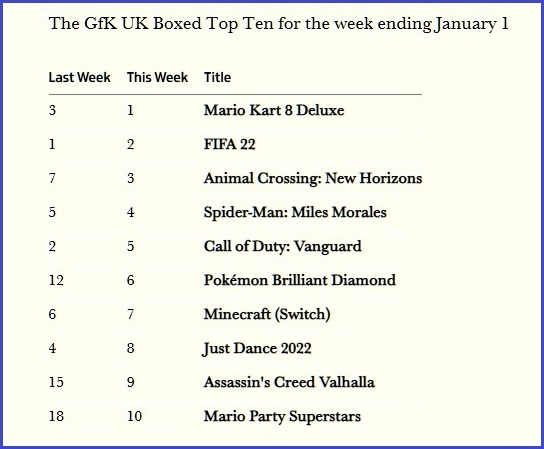 The only game in the entire boxed Top 40 to rise in sales the week after Christmas was New Super Mario Bros. U Deluxe at No.18, which saw a 3% sales increase. The pre-Christmas big new releases were Grand Theft Auto the Trilogy: Definitive Edition (which debuted at No.8) and Among Us (No.5). The following week, GTA dropped 70% in sales and fell to No.23, while Among Us tumbled 81% in sales to No.29. The week afterwards, both games have dropped out of the Top 40 entirely.